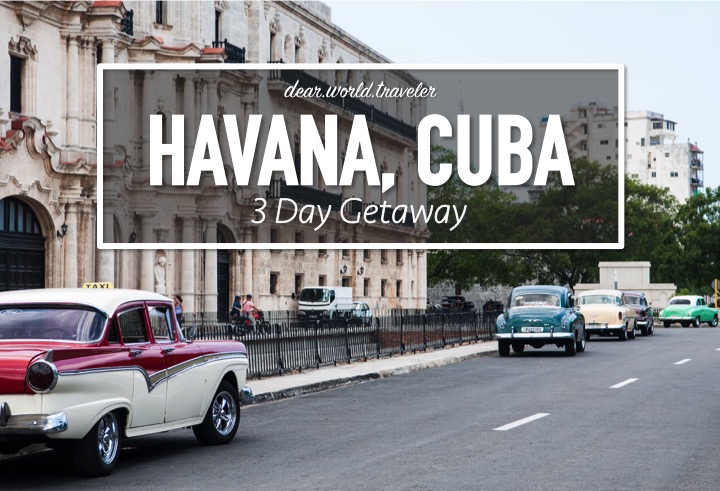 Let’s start with how to pronounce Havana, Cuba like a local.  For Havana, drop the “h” and replace the “v” with a “b” to get “Abana”.  For Cuba, replace the “u” with “oo” for “Cooba”. Now say them together…Abana, Cooba.  It may look weird but the sound is authentic! 🙂

The beginning of my trip started out a little rocky.  We arrived at the airline counter in Miami to catch our 8am flight only to be told that they didn’t have our tickets or Visas! As you can imagine that’s not what you want to hear at 5am…I did my best to remain calm.  Finally after an hour wait the airline had our boarding passes and Visas.  It was smooth sailing from there.  We were off to Cuba!

Here is a quick run down of my 3 day trip to Havana and places you should check out if you’re planning a trip to Cuba.

The first stop after baggage claim was the currency exchange counter at the airport in Havana. American credit/debit cards for the most part are not accepted in Cuba so cash is a must! It’s advised to bring Canadian dollars (CAD) and exchange those to avoid a 10% tax on US dollars (USD).

Cuba has a dual currency system.  Cuban Pesos (CUP) for locals and Cuban Convertible Pesos (CUC) for tourists.  1 CUC (pronounced “kook”) equals 1 USD.  Be sure to exchange your money for CUCs.

We were picked up from the airport by our tour guide, a young English-speaking Cuban, in a rust colored 1954 Ford Fairlane Station Wagon.  The interesting thing about the car is that the engine was made by Mitsubishi.  This is actually how most of the classic cars on the road in Cuba are preserved.  The engines and interiors are from newer car models.  It was a fun way to ride around the city.  The tour guide was arranged by the travel agency that organized the trip.

3. STAYED WITH A LOCAL FAMILY IN NEIGHBORHOOD OF VEDADO

I stayed in a casa with a local family during my visit to Cuba.  This experience was great since it allowed me to interact with the Cuban people and get a sense of what it’s like to live there. The casa was located in Vedado which is a relatively nice area.  Airbnb has several homes/rooms listed in Cuba at a reasonable price. 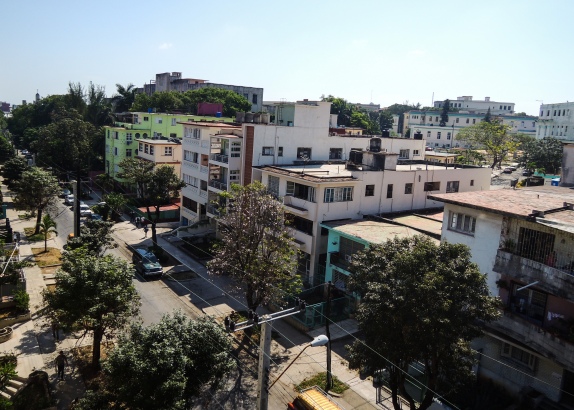 Stretching 5 miles long, the Malecon is a roadway and seawall that was built to protect Havana from the water.  It’s also the road that leads directly to Old Havana and is filled with the classic cars that Cuba is known for.  Many fisherman line the walls during the day and it’s a popular hangout spot for the locals at night.

Plaza Vieja and Plaza de la Catedral are two of the many popular destinations in Old Havana.  Located downtown, Old Havana is a great place to walk around, site see and purchase souvenirs.

Internet access in Havana is scarce.  A general rule of thumb is if you see a bunch of people crowded together using their phones, it is likely a wi-fi hot spot.  The tricky part is actually connecting to the wi-fi.  I purchased a username and password from a local to use wi-fi for 1 hour for 3 CUCs.  It was somewhat of a sketchy transaction but it worked.  There are also some hotel lobbies that have internet access. 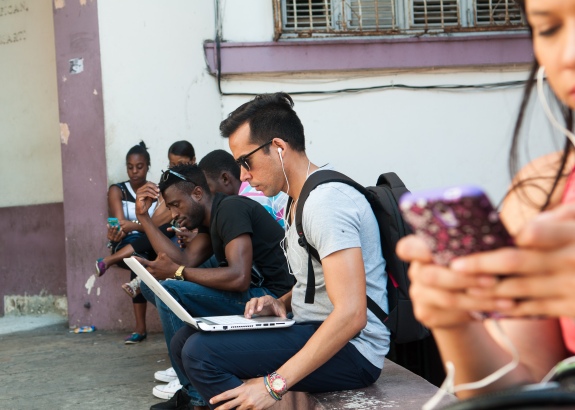 Hands down the coolest club in Havana!  With a night club on the first floor and a modern art museum on the top floor (yes, museum) it’s the perfect place to hang out.  Get your twerk on and then head upstairs to be enlightened!  Read more about it [here]…

One of the benefits of staying with a local family is a home cooked meal in the morning. Our host was nice enough to make us breakfast. 🙂

This museum has many works of art that visually reflect the island’s Spanish colonial past and present.  Painters such as Eduardo LaPlante showcase Cuba’s history of slavery and provide a very eye-opening experience.

3. MUSEUM OF THE REVOLUTION

Formally the Presidential Palace, the Museum of the Revolution is the perfect place to learn about Cuba’s history.

A popular dish in Cuba is ceviche.  It’s raw fish served with pesto and plantians.  The secret is that lime juice and salt “cook” the fish.  It’s absolutely delish!  Try it out yourself! Get the recipe [here]…

American writer and Nobel Prize winner, Ernest Hemingway lived in Cuba for 20 years.  The hotel room he stayed in is in Hotel Ambos Mundos and is open tourists.  His home in Cuba can also be viewed with the original furnishings. 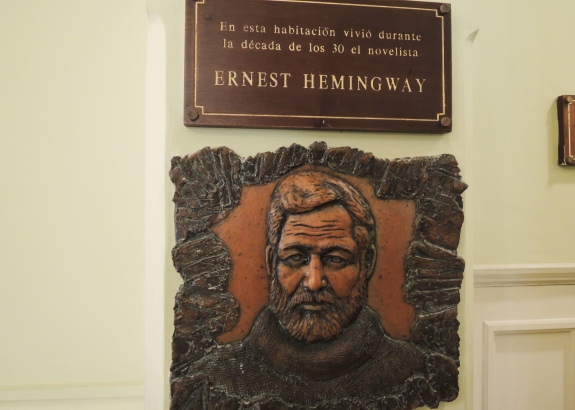 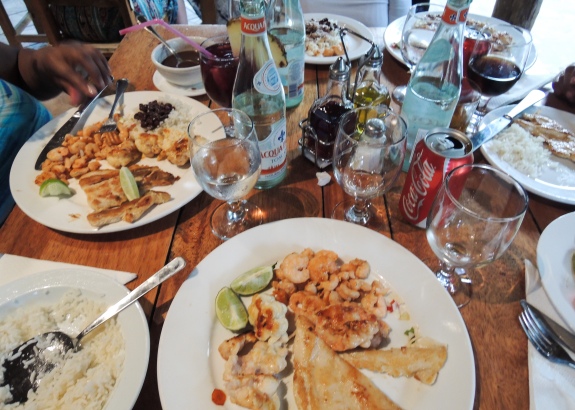 Every night at 9pm on the dot a cannon is fired and heard throughout Havana.  It’s a ritual that dates back to the 17th century that notified Havana’s residents that the walls protecting the city were about to close.  Be sure to arrive well before 9pm to get a good viewing spot among the large crowd. 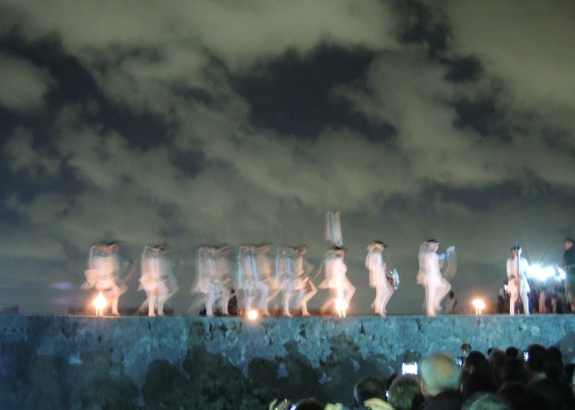 José Rodríguez Fuster is an artist that built Picasso-like structures in an area now known as Fusterlandia.  It’s a pretty neat neighborhood to visit. 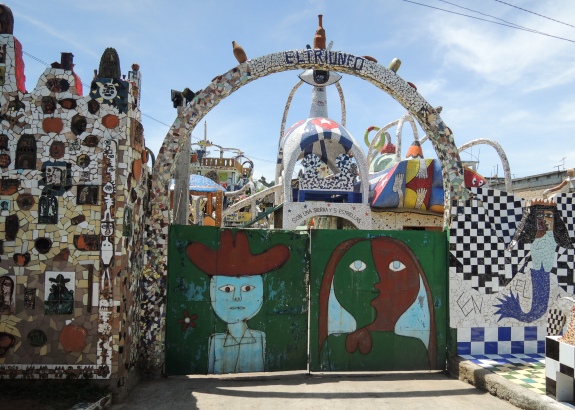 During the trip we took donations to Iglesia Bautista Ebenezer.  Yes, you’re reading that correctly…Ebenezer Baptist Church!  No, not “the Ebenezer” but I was still very shocked to see a replica in Cuba.  Especially since the official religion in Cuba is Catholic and many people practice an African religion called Santeria.

Cigars are the second largest revenue generator in Cuba (after tourism).  If you plan on buying some as souvenirs, keep in mind that you can only bring back up to $100 worth of tobacco products in your luggage.  This also applies to alcohol.  I hear Santiago de Cuba is the best rum and highly recommended by the locals! 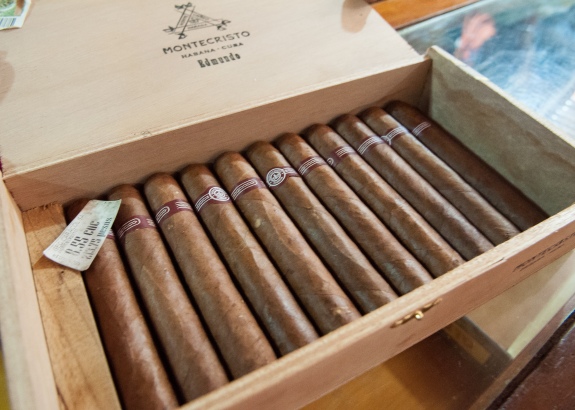 What better way to see the city than ride around in a pink 1959 Buick? #droptop 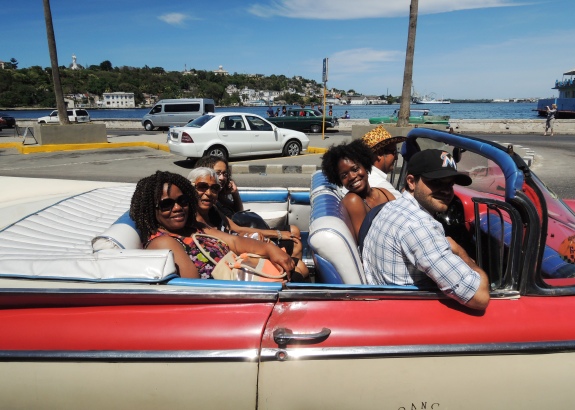 The perfect way to end a short weekend in Cuba…salsa dance the night away! 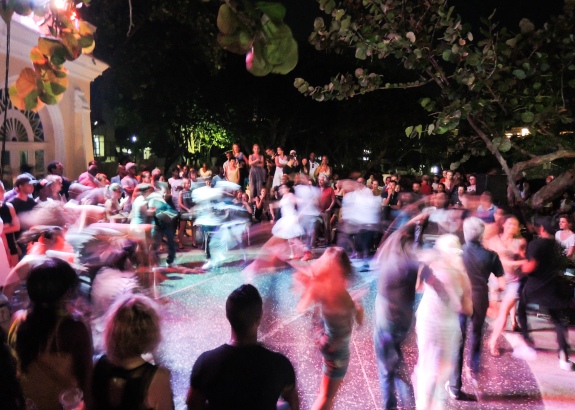 That sums up my trip.  It was quick but well spent.  I had an amazing time and definitely want to go back again!

If you’re planning a trip to Cuba and curious to know how to get there and the cost to travel there, read this blog post.

If you’ve already traveled to Cuba, leave a comment below and tell me about your trip! 🙂

All images are copyright protected.